Overnight ports o’ call include Lisbon – and two overnights in Bordeaux. A highlight will be a planned daylight navigation of the Garonne River right into the heart of Bordeaux. 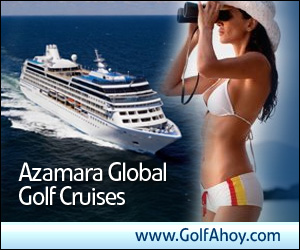 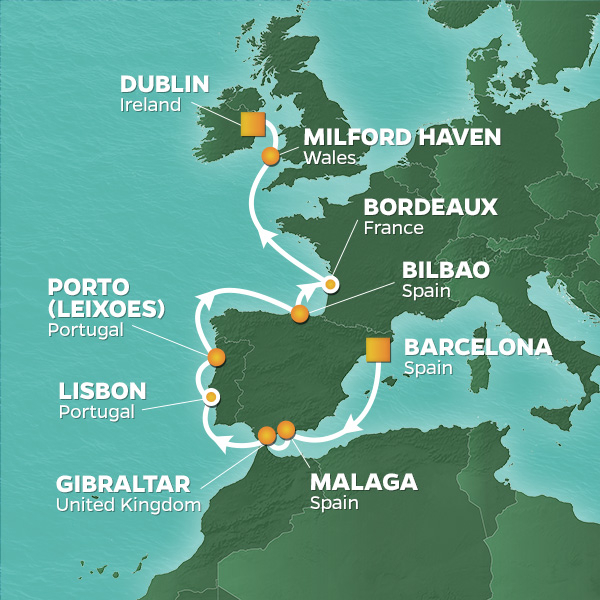 SIGHTSEEING: Barcelona is the 11th most visited city in the world according to MasterCard’s Global Destinations Index and 3rd most popular in Europe behind London and Paris. There’s a lot to like in this Olympic City (1992) from the food to the beaches, the weather, and the nightlife. For many visitors, Barcelona is about architecture, especially the work of Antoni Gaudi. His Sagrada Familia in the city center is astounding. Construction began on the church in 1882; it is scheduled for completion in 2026 on the 100th anniversary of Gaudi’s death.  Azamara ships will almost always dock at the foot of Las Ramblas just steps from the Christopher Columbus statue. You will literally walk off the ship and into the city. No taxi required!

Today it’s time to relax and reset. Make your reservations early for The Sanctum Spa, a world-class wellness facility offering a full range of health, beauty, and restorative treatments. Complimentary fitness and nutrition classes are available along with a fully equipped gym on Deck 9 offering magnificent sea views. There’s room for everyone on the Pool Deck both in and out of the sun. Service to your lounge chair is available from The Pool Bar where the attentive staff is always ready to offer an inclusive cocktail, beer, bottled water, soft drink, or fresh towel. The Patio restaurant serves casual fare during the day then completely transforms itself into a sit-down al fresco dining experience at night with table linens and candles. Elegant specialty dining is available for beef at Prime C and Italian at Aqualina. Windows Café serves casual buffet dining with every imaginable choice indoors and out at the sensational Sunset Bar.

GOLF: Finca Cortesin is ranked as one of Spain’s finest golf courses by Golf Digest Magazine. Cabell B. Robinson’s design beautifully complements the natural landscape. It provides a perfect balance between varieties of flora, the typical Mediterranean forest, and the perfectly manicured Bermuda grasses of the golf course. Finca Cortesin played host to the prestigious Volvo World Match Play Championship for 3 years, with many of the world’s finest professionals competing.

SIGHTSEEING: Malaga is found on Spain’s famous Costa del Sol along with its coastal and inland neighbors Rincon de la Victoria, Torremolinos, Benalmadena, Fuengirola, Alhaurin de la Torre, Mijas, and Marbella. The important cultural infrastructure and the rich artistic heritage have culminated in the nomination of Malaga as a candidate for the 2016 European Capital of Culture. The internationally acclaimed painter and sculptor Pablo Picasso and actor Antonio Banderas were both born in Malaga.

Enjoy Malaga on your own or via Azamara Shore Excursions®.

The Rock of Gibraltar is a sight to behold rising nearly 1,400 feet out of nowhere located in a strategic position at the southern end of the Iberian Peninsula. It overlooks the Straits of Gibraltar and is linked to Spain by a narrow isthmus. Most of the upper Rock, starting just above the town, is a nature reserve with spectacular views accessible by cable car. Gibraltar is imposing but small. It measures less than six square kilometers and is inhabited by around 30,000 people made up of Gibraltarians, British, Moroccans, Indians, and Spanish. There is a colony of the famous, camera-hogging Barbary apes who run free in a semi-wild state. Gibraltar is a British self-governing colony and a member of the European Union by virtue of Britain’s membership.

Enjoy Gibraltar on your own or via Azamara Shore Excursions®.

Lisbon is one of the oldest cities in the world. Its magnificent harbor made it a logical trading port as far back as the Phoenicians, as well as a departure point for 15th-century voyages sponsored by Prince Henry the Navigator, patron of Portuguese explorers. The city is rich in architecture, from Romanesque and Gothic to postmodern, and crisscrossed by monument-studded grand boulevards. Today it is seeking a place on the world stage by hosting, in addition to its own active cultural calendar, film festivals, art, fashion, and design shows, book fairs, marathons, and rock concerts.

Enjoy Lisbon on your own or via Azamara Shore Excursions®.

GOLF: Oitavos Dunes is located on the most westerly tip of Europe and mixes wondrous views of the Atlantic Ocean against the stunning backdrop of the Sintra Mountains. Oitavos was designed by the renowned Arthur Hills and is one of two European Courses that bear his name. The course was inaugurated in 2001 and has been ranked in the top 100 in the world. Oitavos Dunes is a par 71 course that measures 6,900 yards from the competition tees. The layout is a lovely mixture of woodland and links-type holes that capitalize on the existing landscape.

GOLF: Private and exclusive, Estela is located a half-hour drive from Porto, shaggy dunes border narrow fairways on a 6,800-yard layout that includes two miles of Atlantic Ocean coastline. The spectacular scenery is complemented by the excellent condition of the pen cross bent grass greens and Tifton Bermuda fairways. Duarte Sotomayor, who studied golf course architecture under the acclaimed Robert Trent Jones Sr., designed Estela with the touch of a minimalist, allowing stiff breezes and the natural terrain to create a formidable, enjoyable challenge.

SIGHTSEEING: At the mouth of the Rio Douro lies the city of Porto, famous for its port wine trade. With origins dating back to the 5th century, there is plenty to see in this town that was named the European Capital of Culture in 2001. Stroll the Ribeira neighborhood along the river, explore the Cathedral area, or tour the port lodges of Vila Nova de Gaia across the river. Savoring a taste of tawny port, trip, and seafood while here is highly recommended.

Enjoy Porto on your own or via Azamara Shore Excursions®.

Today it’s time to relax and reset while cruising.

GOLF: Uraburu Golf was designed by revered two-times Masters Champion José María Olazabal, a native of this area. Each hole is an example of the marriage of golf and its surroundings, highlighted by centennial oaks, conifers, and other native trees, providing magical surroundings and views for the golfer. The beauty of the course lies in its diversity, and it provides an outstanding experience for the visiting golfer.

SIGHTSEEING: If Bilbao wasn’t always a household name, it was transformed into one with the opening of Frank Gehry’s groundbreaking Guggenheim Museum in 1997. Located in the heart of the Basque Country, Bilbao became an instant media darling and tourist mecca. And that was just the beginning of an exciting phase of development in infrastructure and cultural activity which, combined with the Basque love of food, wine, and laughter, solidified the city’s place in the annals of tourism.

Enjoy Bilbao on your own or via Azamara Shore Excursions®.

Enjoy a leisurely morning at sea, and an afternoon scenic navigation of the Garonne River right into the heart of Bordeaux. Bordeaux’s fortunes have long been tied to viticulture, beginning with an expansion of the wine trade with England in the 14th century. As a result, it is a handsome and cohesive city of uniform classical and neoclassical style, with monumental buildings and many fine estates financed by the almighty grape. The nearby countryside is alive with wine chateaux sporting impressive appellations such as Pauillac, Sauternes, Margaux, and Saint-Emilion. A visit is an excellent opportunity to learn more about wine production and appreciation, which of course requires a considerable amount of tasting to accomplish.

Enjoy Bordeaux on your own or via Azamara Shore Excursions®.

GOLF: Golf du Medoc crafted from the genius of American architect Bill Coore, this Scottish links-style course opened in 1989 and has earned its reputation for immaculate putting surfaces. Consistently ranked in the top 100 in Continental Europe, the Chateaux course evokes images of classics such as Sunningdale and Swinley in the British Isles, combining heather, gorse, broom, and, of course, the menacing wind. No. 11 is an intriguing risk/reward par 4. A creek bisects the fairway and demands a decision, offering bold and conservative routes to the green.

Another opportunity to enjoy Bordeaux prior to our late afternoon departure when we make the scenic navigation of the Garonne River before heading back out to sea.

Today it’s time to relax and reset onboard while cruising.

The delightful Milford Haven developed as a whaling town in the late 17th century due to its position sitting on the shores of the largest estuary in Wales and with one of the deepest natural harbors in the world.  Naval dockyards, passenger liners, and a fishing fleet all pepper the town’s past. Its history can be dated back to the Vikings in 854 when chieftain Hubba wintered his fleet of 23 ships in the Haven.  Since then, Milford has been used in many a campaign; Richard ll used Milford haven to launch his attacks on Ireland in 1399 as did Cromwell and his army in 1649.  The quayside now boasts an impressive collection of cafes, restaurants, and upscale shops.

Enjoy Milford Haven on your own or via Azamara Shore Excursions®.

Disembark Azamara Pursuit at 9:00 AM.

Club Veranda Stateroom from $6,599 per person based on double occupancy