Attached is a summary of my thoughts on our recent GolfAhoy golf cruise to Hawaii.  Please feel free to use any or all of it.  I’m quite sure this is more than you anticipated receiving.  If you would like any of it reworded for your purposes, just let me know. I will send a few pictures from my cell phone. Thanks for planning this wonderful golf vacation for our 50th wedding anniversary. 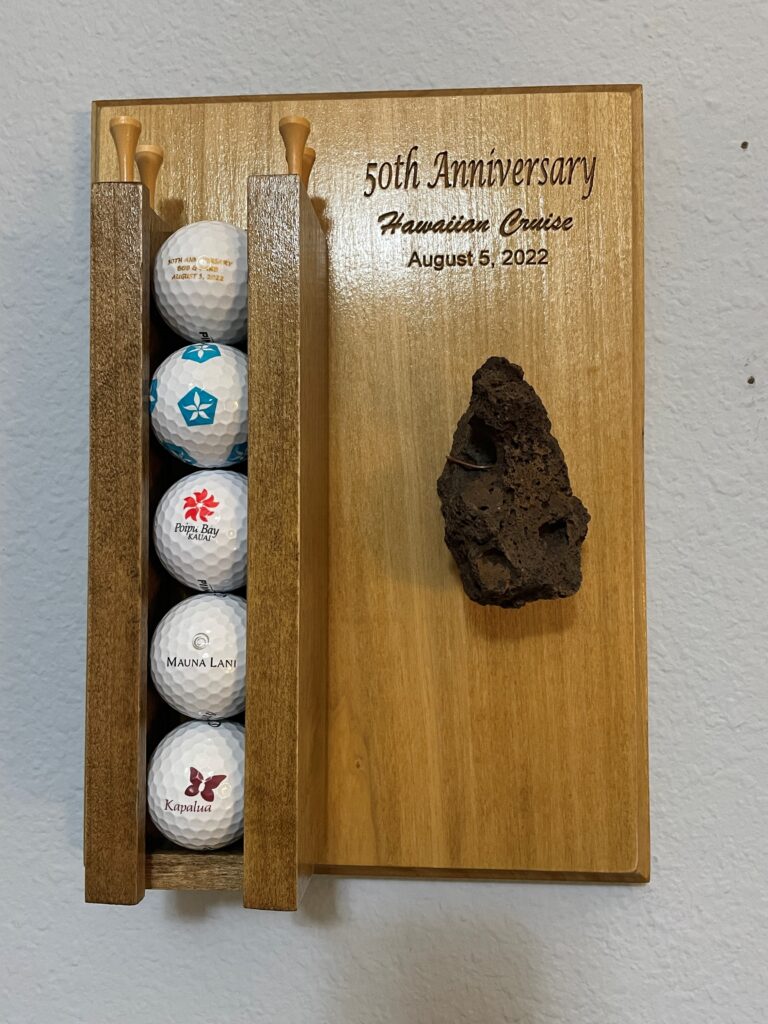 I played 5 courses in 6 sailing days; I clearly needed a day off, Tuesday, since I am pushing 75 (not score but age).  The selection of courses was outstanding.  All the courses were highly regarded and were a pleasure to play.  All 5 selections had large elevation changes or chasms to fire over.  Green sizes rivaled St. Andrews and had multiple plateaus as well as numerous subtle breaks.  With Stimp readings over 12, be prepared to tally several three putts.  The wind in Hawaii ranged from a refreshing breeze to an almost unplayable 35+ mph on The Plantation course.  But if you didn’t want to play in wind, you should go to the beach.  The temperature was perfect every day (75-85) and we experienced only two brief cloudbursts the entire week. 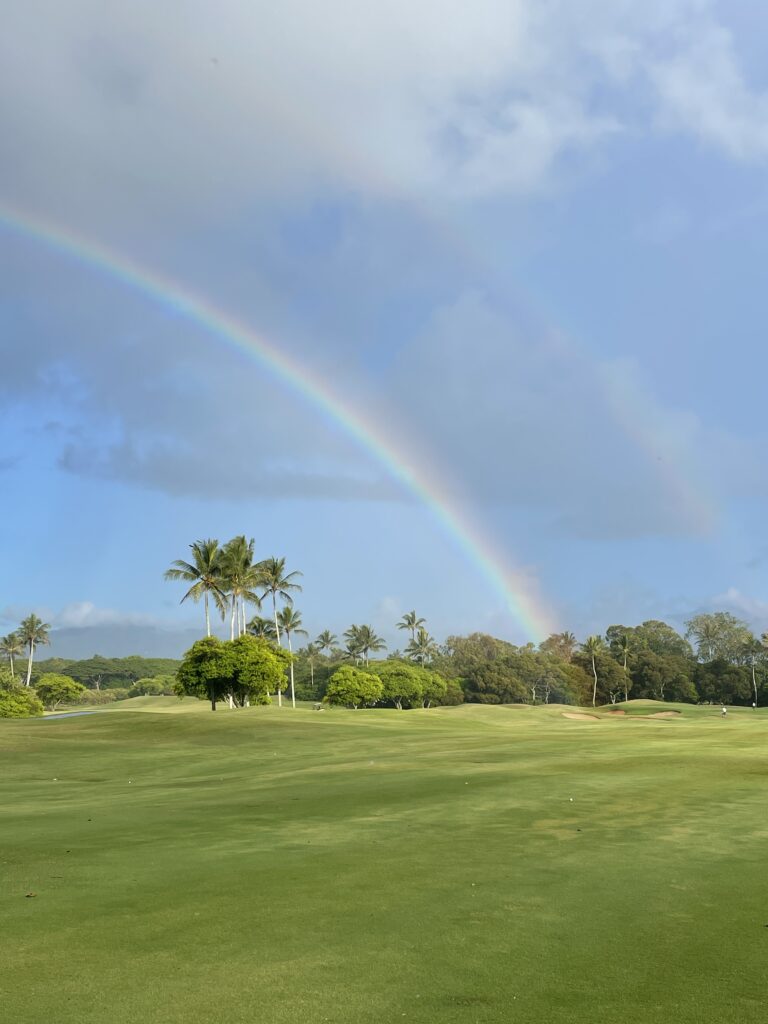 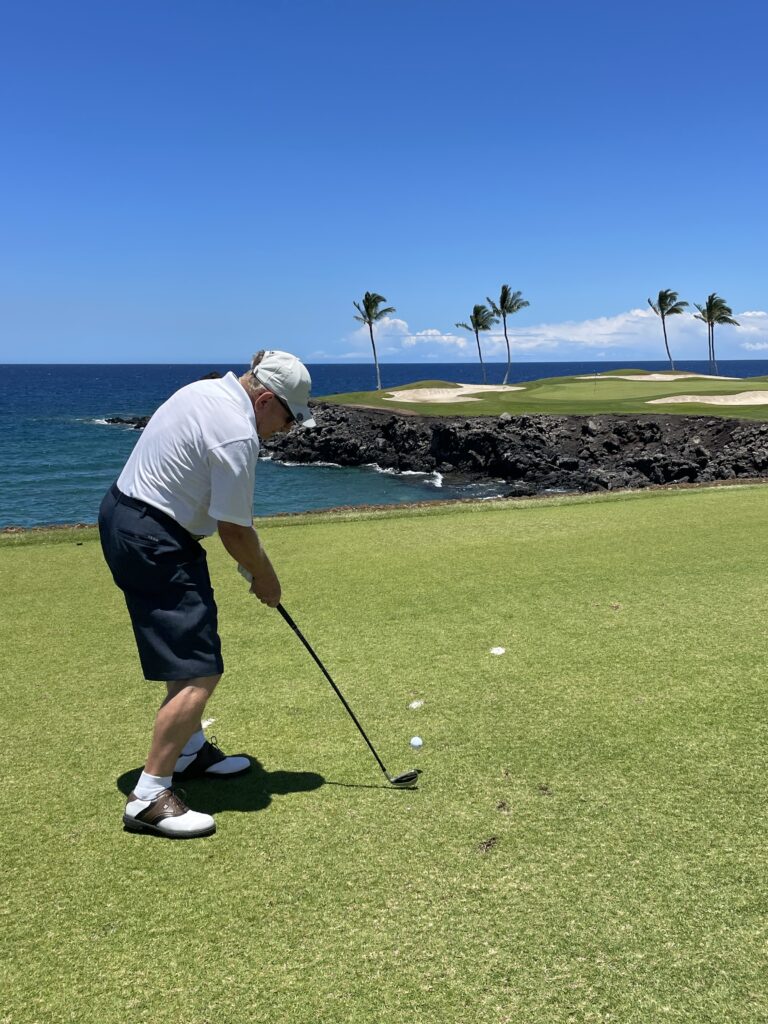 All the player and equipment transfers were coordinated by GolfAhoy. They were flawlessly executed by pleasant drivers in Mercedes Sprinter shuttles. One special appreciative note on transfers: our luggage was transferred from our Waikiki hotel room directly to our Penthouse Suite on the ship. This was a huge benefit. Additionally, when we played two rounds on the same island, our clubs were kept in safe keeping by our GolfAhoy chauffeur for the night: thereby avoiding more club lugging on and off the ship. This was also a huge value add benefit. I only used the Butler on the ship once to carry my golf bag from our Suite to the gangplank as the benefit was not worth the hassle.

Mauna Lani was not on our original course list, but GolfAhoy was able to quickly make the substitution. More on this later.  I had two bucket list courses on this cruise.

Since I was a teenager, I wanted to play Mauna Lani (Kona on the Big Island) with lava flows surrounding every hole and spectacular ocean front holes. I waited too long to get there. The course was so popular; that two more nines were created, and the original track was split into the North and South courses. We played the South course which included the original Front 9 as our Back 9. What a way to finish! It was everything I dreamed of.  I managed a 41 on the original 9 that included a triple bogey on 10, somewhat neutralized by a birdie on 11 and two 3-putts on the par threes. I will replay this round in my head for years to come.

The Plantation Course at Kapalua was the other bucket list round I’ve always wanted to play. This is the PGA TOUR Tournament of Champions course you have seen on TV for years. Bill Coore and Ben Crenshaw created this monster in 1991. On a calm day, this is a huge challenge. With steady winds of 15-20 mph and gusts over 35, it was clearly beyond our capabilities. Several times balls that were replaced on the green began to roll away of their own accord, the wind was that strong! I had 7 pars, 7 doubles, and 4 bogies.  There were several blind shots that I would play differently if I have another chance. It is inconceivable that Cam Smith had a tournament score of -34. Having said all that, it was a real treat to challenge this course in person. And YES, I will not forget my 330-yard drive on number 18 (and I did make par on this amazing finishing hole).

The other three courses were similar in many respects but had their own identities. These were designed to be enjoyable but challenging resort courses. All featured ultra-large greens and great views of the ocean.

The Emerald course at Wailea was the day following The Plantation boot camp. The Pro promised the most beautiful course in Hawaii. Not sure about that, but it is a real beauty. Normal winds helped create a very delightful experience, especially after Kapalua.

Day 3 was a rest day followed by Mauna Lani.

Up next was Poipu Bay on Kauai, the last island we played golf on. They don’t call it The Garden Island or Flower Island for nothing. This island and these courses were in drastic contrast to the stark lava-covered Big Island the day before. Lush greenery was everywhere, and the island is infested with bright red-headed roosters and their hens. Expect to hear loud crowing during your backswing. GolfAhoy arranged for my non-golfing spouse to ride along in my cart to view this garden wonderland with spectacular ocean views. A real treat for our 50th wedding anniversary. More on that later.

Our final round was on the Ocean Course at Hokuala. This Jack Nicklaus layout featured some of the most unusual holes I have ever played. Of special note was Number 16, a 265 yd par 4. Once over the plateau, the fairway narrowed unforgivingly and dropped 50 feet at least. The green was perched on a spit of land surrounded by water. From this near ‘island’ green, we had an unexpected view of the bow of our cruise ship! A real treat. I made a disappointing unremarkable par after I nearly drove the green. My travel companion made a birdie with three 5 irons (layup drive; full iron down the hill that kicked off the mountainside onto the green; and a 5-iron putt (forgot his putter on top of the hill). Please note that with a 2 pm sailing, you will have a 6:45 am dock pickup time to get this unforgettably beautiful round-in. Well worth the early wake-up call.

To sum up, I can’t say enough about the pre-planning, course selection, transfer execution, and overall trip management and communication by GolfAhoy! This was a 50th Anniversary celebration my wife and I will never forget. 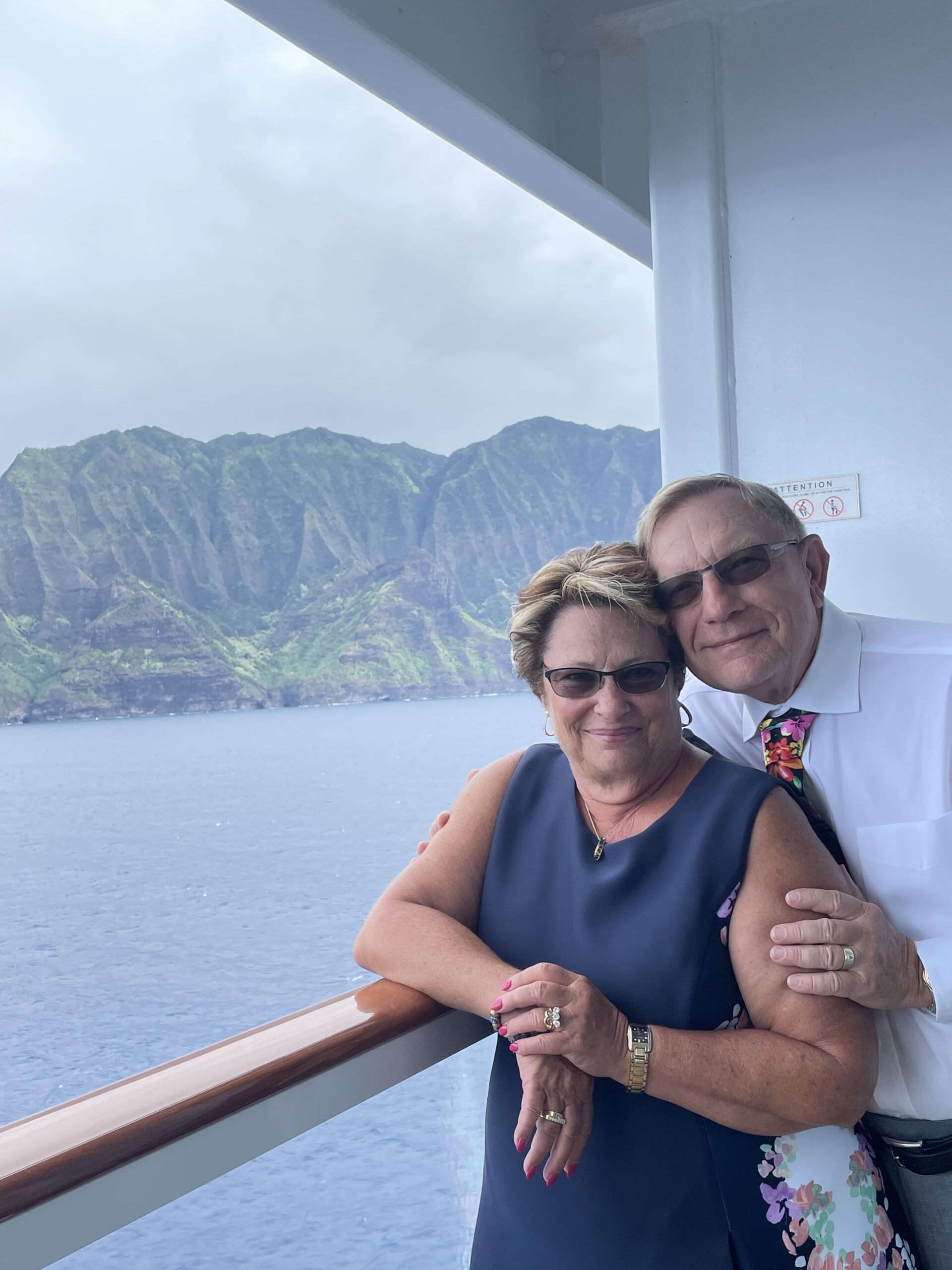 Waikiki Hilton Hawaiian Village Resort. We stayed here for two evenings before the cruise. This is truly a village. Extremely busy. The room was adequate, maybe even large by other hotel standards with a partial view of the Pacific Ocean. Checking in was a bit of a hassle as the taxi drop off is a long way from the check-in desk.  The evening Luau on the hotel grounds had good food and spectacular entertainment.

Airline. We traveled from Orlando to Honolulu via San Francisco on United.  The first leg was uneventful and packed. The second leg never got off the ground until we changed planes 5 hours later. Left home at 5 am. Should have been in Honolulu at 2:30 pm (6 hr time change). Actually, arrived at 8:30 pm.

Returned home on Alaska Airlines via Seattle. Brand new 737 Max. Lots of over head bin space. You had to preorder food (we found out later) and no in-seat screen (gotta use your phone).  Of special note: We took the NCL excursion to Pearl Harbor preflight. We were dropped off at the airport at 3:15 pm for a 9:15 pm red eye. We were not allowed to clear the Agriculture inspection or Alaska Air check-in until 6:45 pm. We did not have access to the airport terminal and were forced to wait outside for 3 plus hours with no access to water or food of any kind. Honolulu International Airport is the worst in the world.

NCL Pride of America. This is a one-of-a-kind relatively old ship in today’s cruise industry. It received a multimillion-dollar refit in 2016 and then again, another refit in 2020 when covid hit it out of service for two years. It resumed sailing again at the end of April 2022. We found it to be more than adequate and actually a very good boat overall. Due to staffing shortages, there were only 900 passengers on a ship with a capacity of 2,100.  Only 2 of the 6 Specialty Restaurants were open. There were no shows in the lovely theater. We did not take advantage of the entertainment that was provided as we opted for a leisurely dinner and early bed. The Concierge and Cabin Steward were outstanding. The Butler not so much – always extremely busy. We don’t know how many Suites he serviced.

We had a Penthouse Suite with an extra-Large Balcony. This was an excellent choice and worth the upcharge.  Our travel companions had a regular Balcony Cabin and were quite disappointed with its size after they saw ours. The layout of our Suite was quite well done. The wood trim gave the room a very rich and comfortable feel. The bed seemed larger than a regular king. The balcony was beyond “large”.  It rivaled the size of the cabin. We had an ideal facility and space to host our friends to view the Na Pali coast sail-by on our Anniversary day afternoon and evening. Special Note: You must book a Port side cabin as you will have 2-3 daylight hours viewing of this spectacular Kauai coastline from your balcony.

The food on the ship was uneven. At times it was quite good and at other times just acceptable. With early golf pickups and late lunches back onboard, I took advantage of the 24 hr Cadillac Diner. Having a Suite also gave us access to Cagney’s for more formal served breakfasts and lunches.

Only one but significant disappointment: After pre-booking our 50th Anniversary dinner at Jefferson’s Bistro, I triple-checked that it was booked the evening before with the manager. It was totally forgotten by the manager when we arrived at Jeffersons for our 50th Anniversary dinner. The staff delivered a cake with love songs to an Anniversary couple three tables away.  All we got was the check! The bottle of wine that was delivered to our Suite by way of an apology by the management at 11 pm hardly made up for the lost moment.

I assume that the service on the ship will improve with time and real entertainment will be reintroduced.